The nights are getting darker, the mornings are getting colder - but our updates are getting hotter! Once again, this week will absolutely smash it out of the park - we can guarantee it! So grab your cup of cocoa and settle in!


Bandit Assault Realm​
Monster Slayer Mask​
Combat Tested Armor​
New Enchant: Rage​
White Scrolls​
Lootbox: Realm Defender​
/is bots​
XP Discovery Nerf​
QoL and Bug Fixes​
40% OFF Sale​
Bandit Assault Realm
We have a good selection of realms already, but you've all been asking for a PvE based one - and we're bringing it today for you! Realms are completely independent of each other and must all be unlocked separately to gain access!
You cannot take anything into or out of Realms with you.
You can only spend a maximum of 30 minutes per day in each realm. Realm playtimes reset at 1pm CDT every day.
When you enter the realm, you can talk to (Right-Click) the Town Guard to receive a Chain Armor Set, Stone Sword, and Stone Axe! If the bandits reach the Crystal and diminish all 100 health, the Assault resets!
If you make it to Wave 10, the Bandit King will spawn!
To complete the Bandit Assault, you need to kill all of the Bandits in Wave 10, as well as the Bandit King. 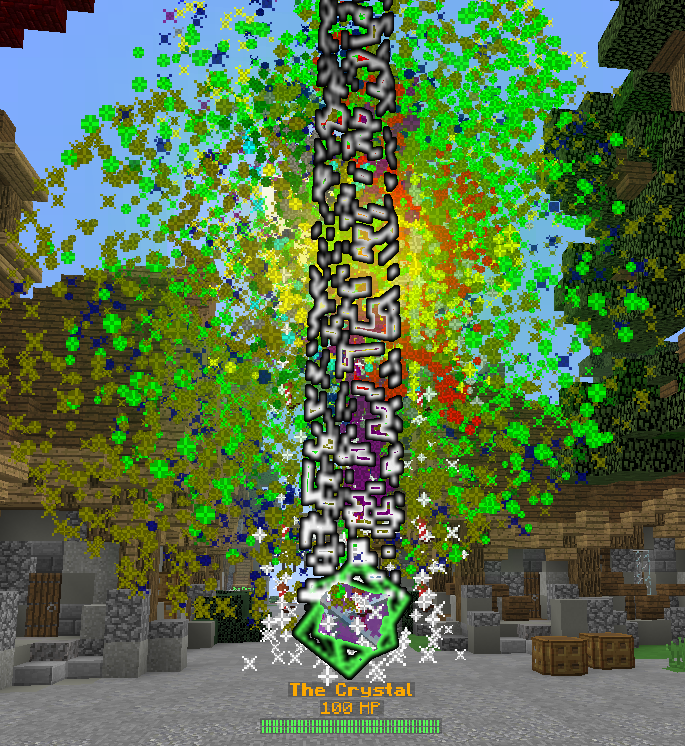 Realm Event: Dead Night
When darkness falls, you know you're in trouble. You're going to have your wits about you for this event! 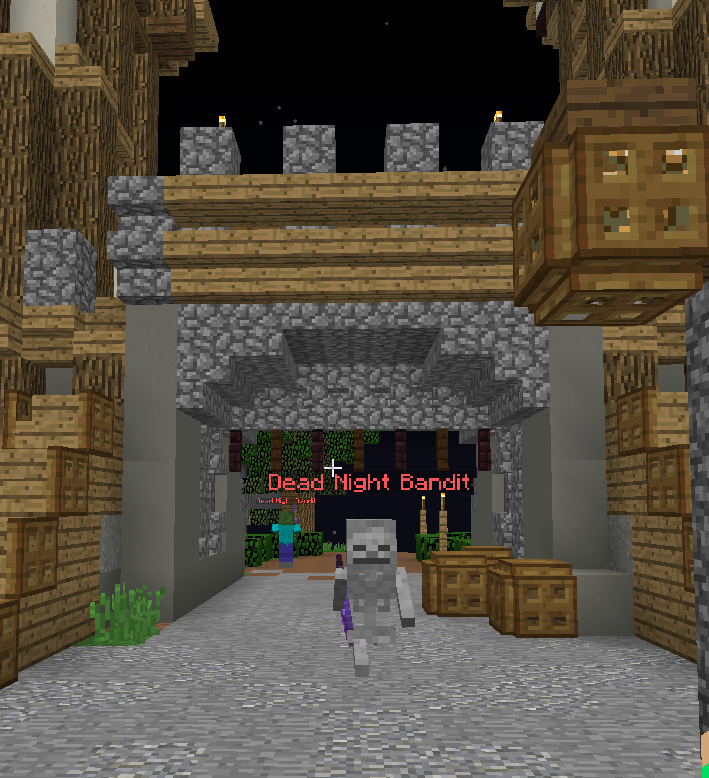 Realm Shop
As has been the case with the previous realms, each has their own custom /realm shop that you can exchange the points that you gain for OP, and often exclusive, loot!

Monster Slayer mask
What an addition to the masks we have for you this week! As a Bandit Assault Realm exclusive, this mask is going to give you everything you'll ever need to get that /is slayer maxed out! 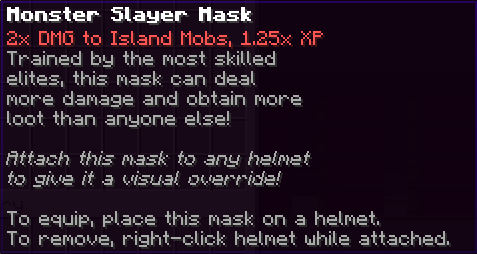 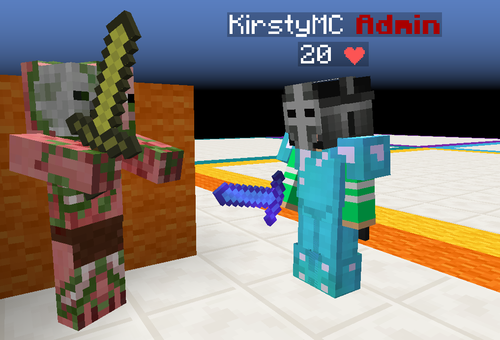 Combat Tested Armor
We couldn't very well have a combat-based realm without some combat-based armor that you can purchase exclusively from the realm shop!
Each piece gives you a +X Health Increase, a +X% Outgoing DMG Increase AND the extreme Unbreaking V on each piece! You're going to want the full set of this!

New Enchant
PvP is going to get even more interesting this week! This is a Bandit Assault Realm shop exclusive enchant!

White Scrolls
We understand the frustration of spending hours, billions of dollars and millions of XP on a set, only to step into /adventures and lose it. White scrolls are here to help alleviate a little of this problem for you! Available from the Bandit Assault Realm shop only, these are rare but worthy! Lootbox: Realm Defender
For all you hardy warriors, this week's lootbox is going to perfect! Grab it while you can from the server store- it won't be about forever! 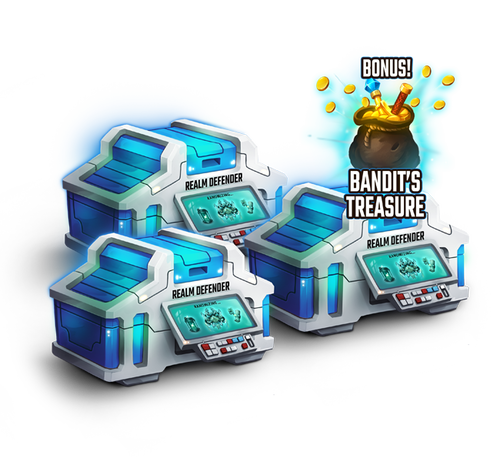 REMINDER: 🥇 The 1st person to claim the latest lootbox will receive a FREE Tier V Rank 🏆
On your marks... set... GO! The first player to /confirm their lootbox will also receive a BONUS Tier V Rank!
Upon claiming it, a global message will be sent to all players to show off your win! 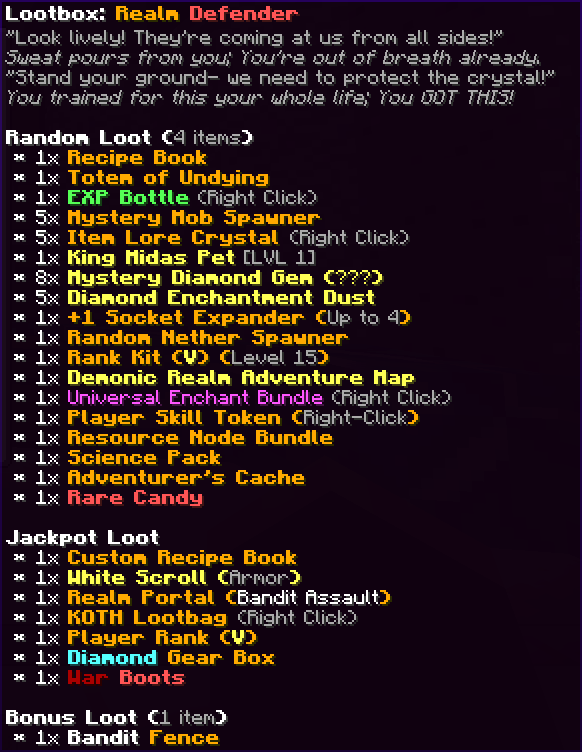 ​
/is bots
Ever been so dedicated to Science that you have so many Bots all over your island and wanted a way to keep track of them all? Well, this week you can do just that!

Simple type /is bots and a list of all your Bots will be shown!

XP Discovery Nerf
You guys are absolutely mental! So mental, we're having to slow you all down! XP Discovery was a little bit TOO OP, even for you guys, so it's had a little nerf this week to make it more balanced in the economy!
QoL and Bug Fixes

40% OFF Sale
What a week! It's about time for us all to catch our breath, and once again, thank @iFamasssxD for the amazing amount of love and dedication that he's put into everything this week - I'm sure you'll all agree with me when you see the Bandit Assault; It's beautiful! To celebrate for it being Friday again, we're offering an outstanding 40% OFF Sale on everything at our server store for this weekend only!

How can anyone say gg to these last patches? Whats the point of playing, you just ninja nerf the top 20 to top 100 islands every second day, while the top players are just snowballing thanks to these god awful patches


.p.s. use code whiskey in the item shop,

Seems like a decent update. White scrolls seem kind of dumb though. Depends how op rage is ig. I don’t think it’ll be that good.

Yeah they aren't exactly changing axes > swords with this, but its a step in the right direction
R