Unbelievably, the whole of January has shot by in a blur- we're almost at the 1-year mark for CosmicSky! If we've been this busy in the first month, cramming in all these updates, I can't wait to see what the next 11 months bring us! And now, onto this week!


Item Filter Profiles​
CosmicClient Combat Text + Player Glow​
/skywars top​
Battlemaster and Skylord Title​
Lootbox: Nae Nae​
Slot Bot Changes​
Chaotic Combat Log Radius​
LMS Auto-Combat Timer​
QoL and Bug Fixes​
35% OFF Sale​
Item Filter Profiles
Filters are a great way to choose what you pick up and what you don't - but now you have even more choice by being able to create a filter profile for the different scenarios!

Additionally, we've added some more items that you are able to filter!

Press your Right Shift key to access the CosmicClient menu and click settings- you will find the Combat Text area where you can customize what you see and how you see it! NOTE: If the player is fully green you will need to turn off Fast Render in your Minecraft settings.

/skywars top
It's always great to see which position you're in, so we've added /skywars top for all your bragging needs!

Simply type /skywars top ingame and you'll be able to see who's the greatest bridger of all time in Skywars! Additionally, the Skywars map has had a couple of changes this week to prevent players tunneling into the main island and building so high, as well as other QoL changes to make gameplay more fun!
/events
Skywars has also been added to /events GUI, as well as the Events HUD with the CosmicClient! Keep track when the next one is at a glance! 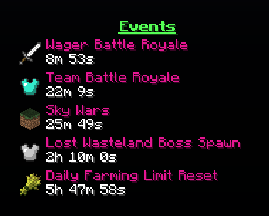 Battlemaster and Skylord Title
Those that are the best of the best need to get recognition, so we've added some awesome titles for those that are /br top #1 and /skywars top #1! 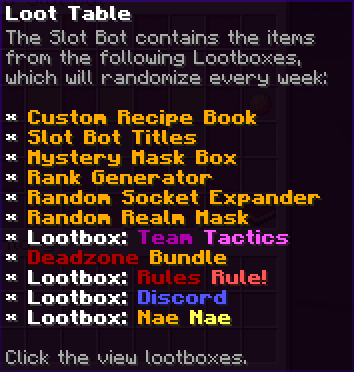 Chaotic Combat Log Radius
When you're Chaotic you need to be running faster- if you log out within 48 blocks of another player, you will spawn a combat logger, rather than the 16 blocks previously.

Lawful and Neutral will still only spawn a combat logger if they are 16 blocks or less from an enemy player.

As soon as you enter the LMS Cap region, you will be flagged for combat

QoL and Bug Fixes
As you will have noticed during the week, a fix was pushed regarding a couple of critical PvP based elements
Additionally, we have also

35% OFF Sale
To cure the last of those January blues, we've got an amazing 35% OFF Sale across the whole of the server store for the weekend only! Enjoy!
Last edited by a moderator: Jan 31, 2020

BUT WHERE IS THE EMOTE?

Cookay89 said:
I see you.
Click to expand...
No I see you. Im posting this at 10:07 pst right after your post, but moderated so you won’t see till later.